The Nation That Never Was: Reconstructing America’s Story

The Nation that Never Was: Reconstructing America’s Story

This ticket is for the in-person presentation of this event only. To learn about the concurrent live-streamed version, please CLICK HERE.

There’s a common story we tell about America: that our fundamental values as a country were stated in the Declaration of Independence, fought for in the Revolution, and made law in the Constitution. But, with the country increasingly divided, this story isn’t working for us anymore—what’s more, it’s not even true. However, as Professor Roosevelt argues in this eye-opening reinterpretation of the American story, our fundamental values–particularly equality–are not part of the vision of the Founders. Instead, they were stated in Lincoln’s Gettysburg Address and were the hope of Reconstruction,

Reconstruction, Roosevelt argues, was not a fulfillment of the ideals of the Founding Fathers, but rather a repudiation: we modern Americans are not the heirs of the Founders, but of the people who overthrew and destroyed that political order. This alternate understanding of American identity opens the door to a new understanding of ourselves and our story, and ultimately to a better America. 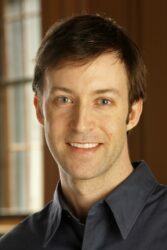 Kermit Roosevelt is a professor of constitutional law at the University of Pennsylvania Law School and was a clerk to U.S. Supreme Court Justice David Souter. His novels include “Allegiance and In the Shadow of the Law,” and his nonfiction includes “The Myth of Judicial Activism: Making Sense of Supreme Court Decisions and Conflict of Laws.” Professor Roosevelt’s law review articles have been cited twice by the Supreme Court. In 2014 he was selected as the Reporter for the Third Restatement of Conflict of Laws. He is a graduate of Harvard University and Yale Law School, and is the great great grandson of President Franklin D. Roosevelt as well as a 4th cousin of President Theodore Roosevelt! For more information please visit www.kermitroosevelt.net.