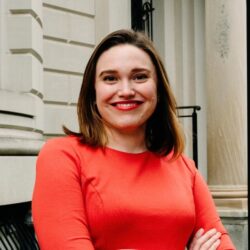 Historian Allison K. Lange is associate professor at the Wentworth Institute of Technology in Boston, where her work explores the intersection of gender and power in US history. For the 19th Amendment centennial, Lange served as Historian for the United States Congress’s Women’s Suffrage Centennial Commission. She also curated exhibitions at the Massachusetts Historical Society and Harvard’s Schlesinger Library, as well as a website for Melinda Gates’ Pivotal Ventures called Truth Be Told: Stories of Black Women’s Fight for the Vote. Professor Lange is the author of the book Picturing Political Power: Images in the Women’s Suffrage Movement.

Martha Washington: Her Life and Legacy