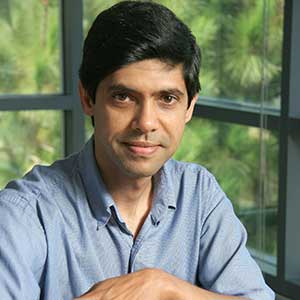 Aniruddh Patel is a Professor in the Department of Psychology at Tufts University, where he conducts basic research on the cognitive neuroscience of music. Before joining Tufts University he was a Senior Fellow at The Neurosciences Institute in San Diego, a private research institute led by the late Nobel laureate Gerald M. Edelman. Professor Patel has served as president of the Society for Music Perception and Cognition and has published numerous research articles and a scholarly book, “Music, Language and the Brain”, which won an ASCAP Deems Taylor award. In 2009 he received the Music Has Power Award from the Institute for Music and Neurologic Function in New York City, and in 2018 he was awarded a Guggenheim Fellowship to write a book on the evolution of music cognition.