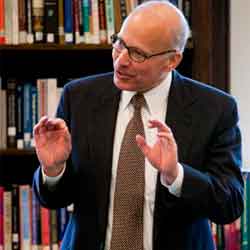 William James Adams is the Peterson Professor of Industrial Organization and Thurnau Professor of Economics at The University of Michigan. Adams has won numerous prizes for his teaching and is the author of Restructuring the French Economy: Government and the Rise of Market Competition since World War II.  Professor Adams has advised the Federal Trade Commission, the U.S. Ambassador to France, and several foreign policy departments of the U.S. government.

Brexit: Where Did It Come From and Where Is It Going?