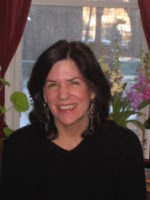 Jennifer Tobin is Professor Emerita of History and Classics at the University of Illinois, Chicago, where she is a two-time recipient of their Silver Circle Teaching Award. Professor Tobin has published widely on everything from Roman architecture in Syria to Alexander the Great, and has worked on archaeological projects in Israel, Turkey, Jordan, and Greece. She speaks Modern Greek, German, French, Italian and Turkish.

The land of ancient Greeks has garnered acclaim for producing some of the greatest philosophers, poets, architects, and artists the world has ever seen. For the ancient Greeks, the cosmos was ordered by 12 omnipotent beings, the Olympiads, who dwelled atop the highest mountain of the land. This diverse body of deities were believed to control natural phenomena, creative (and destructive) activities, and even some aspects of human behavior. This lecture explores the nature of these gods–both loved and feared by the Greeks–who inspired the creation of magnificent temples and artworks, plays, poems, and philosophical treatises still admired today. Professor Tobin will focus, particularly, on Zeus–the king, Apollo–the god of light, music and disease, and Dionysus–whose devotees achieved ecstasy through wine and dance.

3 weeks ago
nitelle.lading
An Olympian Genealogy

Professor Tobin does a great job of breaking down complex issues and making them understandable. Fascinating lecture.

Dr. Tobin is a wonderful teacher, presenting a plethora of information with great clarity and concision and presenting her subject matter in a pleasant manner and at a measured pace.