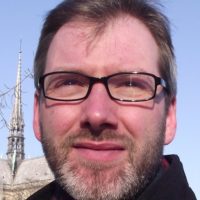 Christopher Hollings is a mathematics professor and lecturer in the history of mathematics at the Oxford Mathematical Institute, as well as a Senior Research Fellow of The Queen’s College, Oxford.  Together with collaborators Ursula Martin and Adrian Rice, he has studied the mathematical manuscripts of Ada Lovelace.  His most recent book, co-authored with Reinhard Siegmund-Schultze, concerns the political events surrounding the 1936 Oslo International Congress of Mathematicians.

Augusta Ada King, Countess of Lovelace–and daughter of the famous poet, Lord Byron–was a nineteenth-century British aristocrat who is sometimes called the world’s first computer programmer. Today, she has become an icon for women in technology. But how did a young woman in the nineteenth century, without access to formal schooling or university education, acquire the knowledge and expertise to become a pioneer of computer science?

What Did Ada Lovelace Invent?

Her fame stems from her speculations, published in 1843, concerning the capabilities of Charles Babbage’s so-called “Analytical Engine” – an ambitious, unbuilt invention that was said to have been a steam-powered general purpose programmable computer. To Babbage, it was little more than a sophisticated calculating machine, but Lovelace recognized that it might be capable of much more.  Babbage’s Engine inspired Lovelace to devise a table of mathematical formulae which many now refer to as the “first program.” Ada Lovelace died at just thirty-six, but her prescient work strikes a chord to this day, offering clear explanations of the principles of computing, and exploring ideas about computer music and artificial intelligence that have been realized in modern digital computers.

The Life of Ada Lovelace

In this lecture, Professor Hollings will give an account of Lovelace’s life and influences, explore her writings on the Analytical Engine, and examine her later life and enduring legacy.

Suggested Reading about Ada Lovelace and Her Inventions: