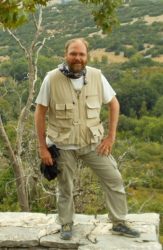 Aristotle Koskinas is one of the most renowned guides in Athens. In addition to lecturing on Greek history and archaeology, he continues to study and publish material from excavations of the Ministry of Culture, and participates in historical reenactment events.

The Archaeology of Athens, by John M. Camp

Athens and Sparta: Constructing Greek Political and Social History from 478 BC, by Anton Powel

The Athenian Agora. Excavations in the Heart of Classical Athens, by John M. Camp

The Athenian Acropolis: History, Mythology, and Archaeology from the Neolithic Era to the Present, by Jeffrey M. Hurwit

Ancient Athens was a dynamic city-state: the preeminent power in Greece in the 5th century BCE. The Athenians played a decisive role in defeating the Persian invaders of 480 BCE. Afterwards, the city’s naval strength allowed it to control the Aegean Sea and helped it forge an extensive alliance. Besides being a major center of commerce and manufacturing, the city was endowed with rich silver mines; together, these made Athens the wealthiest city-state of Greece.

Its citizens honored their gods with a multitude of religious festivals, rich in cultural and athletic events. They also enjoyed a stable political system based on a direct and participatory democracy in which political debate and oratory were of the utmost significance.

All these factors created the conditions for Athens to become the foremost center of education, art and culture in the Greek world. Athens was the city which gave birth to drama and theater; the city which hosted the greatest philosophers and orators of ancient Greece; the city which built the masterpiece called Parthenon, in honor of its patron goddess.

In this lecture, Aristotle Koskinas will introduce us to the history, culture and archeology of that great city. Koskinas will discuss what life was like in ancient Athens. The lecture will focus mainly on the classical period, which was the time of the city’s heyday. After an overview of the history of Athens, the topography of the city will be presented and the social, political, religious and cultural functions of each area will be highlighted. Finally, we will discuss the legacy of ancient Athens.

Learn more about culture in Athens Greece and other important topics by checking out additional great videos at OneDayU, including ‘The Future of Green: Environmental Sustainability and Business’, ‘Dorothy Fields Songs & Musicals’ & ‘Monkeynomics & The Evolution of Decision Making’ all on-demand now.