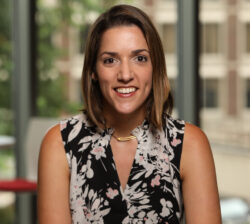 Dr. Kathryn Lasdow is Director of the Public History Concentration and Assistant Professor of History at Suffolk University in Boston. Her research focuses on architecture, city building, and material culture in the early American republic. She is currently working on a book manuscript entitled Wharfed Out: Improvement and Inequity in Early American Cities. Professor Lasdow has written articles on public health in American cities and on the architecture of Lafayette Square in Washington. She previously worked as a Historian and Curator for the Brooklyn Historical Society and as an Educator and Researcher for the White House Historical Association.

For much of the eighteenth century, Americans living in the British colonies sought to display their “Britishness” through architecture. Neoclassicism and an adherence to the “Georgian” style served as physical and visual proof of their British heritage. With the American Revolution, however, the ties between England and the colonies severed. Cities once designed to exalt and honor the monarchy became stages for protest and backlash. Soon, a new architectural style called “Federal” sought to distinguish American cities from their European predecessors…. Or did it? Join Professor Kathryn Lasdow to learn about the evolution of American city design and architecture from the American Revolution to the early Republic. You’ll explore the characteristics of neoclassical architectural traditions, the urban design ties between America and Europe, and the social and political forces that transformed America’s built landscapes.

When London Was Capital of America, by Julie Flavell

The Measure of Manhattan: The Tumultuous Career and Surprising Legacy of John Randel Jr., Cartographer, Surveyor, Inventor, by Marguerite Holloway