Does Extinction Matter? The Environmental Consequences of Declining Biodiversity 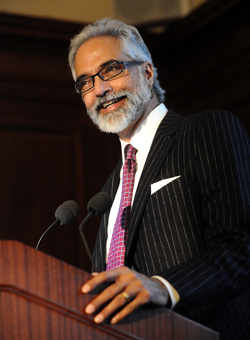 Shahid Naeem is Professor of Ecology and chair of the Dept. of Ecology, Evolution and Environmental Biology at Columbia University.  He also serves as Director of Science for Columbia’s Earth Institute Center for Environmental Sustainability (EICES). Recipient of the Ecological Society of America’s Buell and Mercer Awards, as well as the Lenfest Distinguished Faculty award at Columbia University, he is also a fellow of the Ecological Society of America, fellow of the American Association for the Advancement of Science, and an Aldo Leopold Leadership fellow.  Considered among the “World’s Most Influential Scientific Minds” in environmental and ecological science by Thompson Reuters/Clarivate, his teaching, research, and publications focus on the importance of biodiversity in the functioning of ecosystems and the services they provide humanity.

No feature of Earth is more extraordinary than its Biosphere: that veneer of organic matter that covers Earth, making it verdant, resilient and habitable. However, what’s truly extraordinary about the Biosphere is not its mass, age, and biogeochemical power, but the staggering diversity of life forms it contains. Currently, biodiversity is declining in every ecosystem on Earth. Of the many global environmental changes we face today, none are as massive, complex, fast-paced, and difficult–if not impossible–to reverse than declining biodiversity.

Putting aside the tragedy and moral crises associated with extinction, we can ask, from a scientific, utilitarian, and objective perspective: does extinction truly matter? Does it matter if our current stock of 8.7 million species declines to 2.2 million species, or even further to just a few hundred?

In this class, Professor Naeem will consider origination and extinction throughout Earth’s history, and the current state of biodiversity. He will explore how life governs local and global environmental conditions and review the recent scientific research that has demonstrated the critical roles biodiversity plays in governing ecosystem functions. We will then take a look at what can and is being done to stop extinction–and whether or not we can prevent a possible global collapse of Earth’s environment if extinction is allowed to go unchecked.