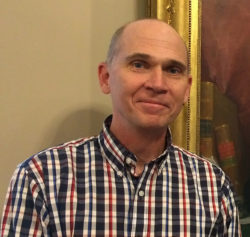 By 1856, geographers had confirmed that Mount Everest is the tallest mountain in the world, and ever since then, no peak has loomed larger in the human imagination. Unfortunately, few mountains have been deadlier for climbers, over 300 of whom are known to have died seeking its summit.  In this presentation, Professor Daniel Breen will explore some of the triumphs and the tragedies of the human encounters with Everest: from the Victorian surveyors who first identified it as the “roof of the world,” to the men who–a century later–made the first successful ascent.

The Great Arc: The Dramatic Tale of how India was Mapped and Everest was Named, by John Keay

Into the Silence: The Great War, Mallory and the Conquest of Everest, by Wade Davis

High Adventure: The True Story of the First Ascent of Everest, by Edmund Hillary

1) When asked why it was so important for him to climb Mount Everest, George Mallory was said to have replied, “because it is there.” But is that a good reason for attempting the ascent of such a perilous mountain?  Has it ever been rational to undertake this challenge, just for the sake of being able to say that you have met and overcome it?

2) Before the pandemic, about 800 people a year were attempting to climb Mount Everest, usually paying tens of thousands of dollars for the privilege of doing so.  Should this kind of tourism be encouraged, or should the number of climbers be dramatically limited, to preserve Everest in something close to its natural state?