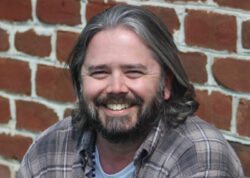 Vernon W. Cisney is Chair and Associate Professor of Interdisciplinary Studies at Gettysburg College in Pennsylvania.  He is the author of Deleuze and Derrida: Difference and the Power of the Negative, and Derrida’s Voice and Phenomenon: An Edinburgh Philosophical Guide, and has recorded a lecture series titled “The Devil: A Biography.”

“Everything I leave behind me… is to be burned unread and to the last page.”

—Letter from Kafka to Max Brod

Few authors have left an impact as extensive and polymorphous as Franz Kafka. Kafka was born in 1883 in Prague, when it was part of the Austro-Hungarian Empire. He was a minority on two fronts: Jewish in a predominantly Christian country, and a German-speaker in a predominantly Czech-speaking city. He came of age at the height of European anti-Semitism, dying of tuberculosis in 1924 on the cusp of Hitler’s release from prison. Aside from a few collections of short stories, Kafka published almost nothing during his life, and asked of his friend, Max Brod, that all of his unpublished works—manuscripts, letters, diaries—be burned upon his death. Fortunately for subsequent generations of artists, writers, thinkers, and readers, Brod failed to heed Kafka’s request. In this lecture, we will discuss the major themes of Kafka’s works—madness and reason, faith and the absurd, power and its impact on everyday life, and the relation between literature, art, and existence—through a close discussion of his most famous story, “The Metamorphosis,” branching from there into aspects of his unfinished novels.

“The Metamorphosis,” by Franz Kafka (this story is available online and in almost all collections of Kafka’s short stories)

The Trial, by Franz Kafka

The Castle, by Franz Kafka

Kafka’s Blues: Figurations of Racial Blackness in the Construction of an Aesthetic, by Mark Christian Thompson

2)    What sources and forms of alienation (estrangement) does Kafka identify in his work? How relevant are these modes of alienation in the 21st century?

3)    What insights does Kafka offer regarding differences of gender, sex, race, and class?

Excellent lecture. Notably the amount of information in the lecture and the answers in the Q&A. Bravo.