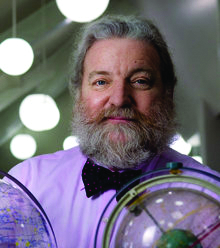 David Helfand has been a Professor of Astronomy at Columbia University for 42 years, where he served as chair of the Department for nearly half that time. He is also the former President of the American Astronomical Society and of Quest University Canada, and currently serves as Chair of the American Institute of Physics. Professor Helfand has received the Columbia Presidential Teaching Award and the Great Teacher Award from the Society of Columbia Graduates. He is the author of A Survival Guide to the Misinformation Age.

In April of 1990 the Hubble Space Telescope was launched, providing new views of the Universe that have riveted us for a third of a century. But Hubble’s eyes, while vastly larger and unobscured by the atmosphere, are pretty much like our own — limited to just over a single octave of cosmic radiation. Last Christmas morning, we began opening a new window on the Universe with the launch of the James Webb Space Telescope. By far the most complex device ever placed in space, Webb will allow us to see how the first stars and galaxies emerged from the Dark Ages of the early Universe, and to assay the atmospheres of planets beyond our solar system in a search for extraterrestrial life.

Lonely Hearts of the Cosmos: The Story of the Scientific Quest for the Secret of the Universe, by Dennis Overbye

Exoplanets: Hidden Worlds and the Quest for Extraterrestrial Life, by Donald Goldsmith

Professor Helfand was amazing. He clearly knows the topic extremely well. Somewhat unusual for a scientist, he is also funny, clever and engaging. Using pictures of himself throughout his life (back to infancy) as a metaphor for the various age of images we see in space was brilliant.

Oh, if I only could have had him as a professor those many years ago in college.

I highly recommend this session.

This presentation has opened a whole new line of inquiry for me. WELL DONE!

David Helfand draws from a variety of fields to help us understand how amazing an accomplishment building and unfolding the JWST is. He also gives a great background on why this telescope is so important and its addition to our understanding of the universe will be so significant. Well done!