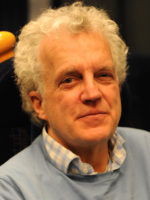 Christian Wolmar is a journalist and broadcaster who specializes in transportation.  A former transportation correspondent for The Independent newspaper, he is a frequent guest on TV and radio shows, appearing most recently in the railway documentary “Ian Hislop: Trains That Changed the World.” The author of twenty books, his volumes on railway history include: The Great Railway Revolution: The History of Trains in America; Blood, Iron and Gold: How the Railroads Transformed the World; and The Subterranean Railway: How the London Underground Was Built and How it Changed the City Forever.

A History of the London Underground

In the mid 19th century, London was the biggest city in the world: at the center of an Empire. But traveling in it was a nightmare, as the roads were clogged with people, carts, stagecoaches, and even horse-drawn omnibuses. That’s why it became host to the world’s first subway system: the Metropolitan Railway, which opened in 1863. Amazingly, this steam-hauled railway became an instant success and soon spread out into the burgeoning suburbs. In this talk, Christian Wolmar tells the story of the world’s first underground railway, explaining how it was built using two different revolutionary methods, and how today, a century and half later, these railway systems are being adopted in cities across the world: from Thailand to Turkey, and Italy to India.