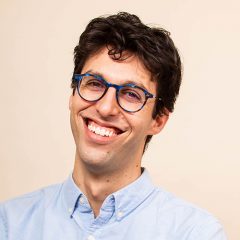 Nate Sloan is Assistant Professor of Musicology at the USC Thornton School of Music. As a musicologist and performer, his research interests include jazz, Tin Pan Alley, and popular music. Sloan hosts the podcast “Switched on Pop” with songwriter Charlie Harding, which has been recommended by The New Yorker, Rolling Stone, and The Guardian, and provides music analysis for The Economist, NPR, The Atlantic, and The Boston Globe. His book Switched on Pop: How Popular Music Works, and Why it Matters, won the Association of American Publishers’ PROSE award for Music and the Performing Arts.

Louis Armstrong is known for his funny voice and great smile, but he’s also one of the most inventive and original jazz musicians of the 20th century. He arrived on the scene like a comet in the 1920s, and quickly became known for his personality as much as for his trailblazing musical style. He remained in the limelight for the following four decades, even beating out the Beatles for the #1 song in 1964 with his recording of “Hello Dolly.”

But how did this kid beat the odds to escape the “Colored Waifs Home for Boys” in New Orleans and become jazz’s first superstar? Join Professor Sloan to explore the musical innovations, classic performances, and key recordings that made Armstrong instantly recognizable around the world. We’ll listen to and analyze some of his most famous recordings, watch and discuss legendary filmed performances, and study how he influenced every musician who followed in his wake: from Bing Crosby to Billie Holiday. By the end of this talk, you’ll have a new appreciation for the genius, and the continued relevance, of the man behind the trumpet.

Satchmo: My Life in New Orleans, by Louis Armstrong

Pops: A Life of Louis Armstrong, by Terry Teachout

Professor Sloan is infectious with his big smile and dancing in his chair while together we listen, learn, and explore the legacy of one of the Greats. Thank you.

Entertaining and inspiring lecture to help us learn about the genius and influence of Armstrong ‘s music.