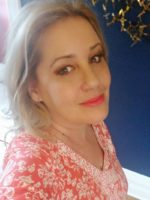 Amanda Hallay is a professor of fashion and cultural history at LIM College, a consultant for the Museo de la Moda in Santiago, Chile, and a consultant for the movie, TV, and gaming industries. She was formerly the European Trend Analyst for The Doneger Group, the International Fashion Editor for Couture and Men Mode magazines, and the Paris correspondent for International Textiles.

August 4, 1962: a movie star dies tragically—an event sadly not unknown in Hollywood history. Yet Marilyn Monroe’s untimely passing at the age of thirty-six was worthy of the international headlines it received. It shocked a world that had known her through movies, interviews, photographs, and scandalous headlines: a world which had already made her an icon. Yet the end of the actress’s life was the start of her journey into myth: her status as a symbol of both The American Dream come true… and The American Dream gone horribly wrong.

On the 60th anniversary of her death, cultural historian Amanda Hallay discusses the evolution of Marilyn Monroe’s legend, and why we seem unable to truly say “goodbye” to Norma Jean.

Great lecture .Can’t wait for your next one

Amanda Hally always does a remarkable job expanding the scope of her subject. She takes the subject and opens the lens as wide as she can get offering a story with a wealth of information. Never dull! Thank you.

4 months ago
kathleen.geraghty
A Riveting Analysis of a Mid-Century Goddess

I love Amanda Hallay’s lectures. LOVE! They are always visually stunning and chock-full of well-researched anecdotes and facts. In discussing Marilyn Monroe and her lasting legacy, Amanda presents a thought-provoking analysis of the star’s impact on art, fashion, feminism and the American psyche. Educational without being stuffy, Amanda’s presentations are nothing short of a gift. XXOO! (Check out her “Ultimate Fashion History Channel” on YouTube. You will be amazed!)

Amanda has redefined the sex symbol for modern times. The image of Marilyn Monroe has been repositioned for today’s world of femininity. Amanda, once again, has proven to the most reliable source of pop culture.