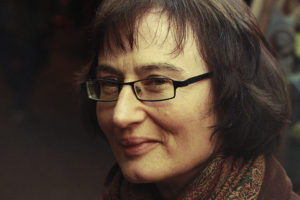 Fiona Sampson MBE is Professor Emerita of Poetry at the University of Roehampton, London. A Fellow of the Royal Society of Literature, the English Association and the Wordsworth Trust, Professor Sampson has served on the Council for the Royal Society of Literature and is Trustee of the Royal Literary Fund. As a poet, she is published in thirty-eight languages and has received numerous national and international honors. Editor of Poetry Review 2005-12, she is the author of the internationally acclaimed biographies In Search of Mary Shelley, and Two-Way Mirror: The Life of Elizabeth Barrett Browning, a New York Times Editor’s Choice and Washington Post Book of the Year.

Our culture is full of versions of Frankenstein and his creature. From cartoonish representations like Boris Karloff’s lumbering monster in the 1931 film of the book, to The Shape of Water (2017)–Guillermo del Toro’s thoughtful cinematic adaptation of this parable about what happens if we create nonhuman “person,” the myth has a tremendous hold on our imaginations. Most myths, including Homeric and other epic stories, are formed over centuries by generations of anonymous and named storytellers and artists. Yet the anonymous publication of the first edition of Frankenstein in 1818 was this story’s first appearance. Now that we know the novel was written by the teenaged Mary Shelley, this achievement is even more extraordinary. What’s more, when it was published Mary Shelley was already leading a complex, politically charged and controversial life as the wife of poet Percy Bysshe Shelley. In this course, we’ll explore her intriguing and inspiring story.

In Search of Mary Shelley: The Girl Who Wrote Frankenstein, by Fiona Sampson

Just such an excellent presentation. You provided aspects of her life and relationships I knew nothing about. I shall look for your book.

This lady is great. I’ve heard her other lectures and could listen to her all day. She reads poetry and discuses writers’ lives in a deep, lyrical way that transports you in time. Thank you for having her as part of ODU!

Such an outstanding lecture, presented so beautifully. I could listen to Fiona talk all day, so gracefully. She enlarged my understanding of this work, particularly with her emphasis on myths.

I really enjoyed this presenter and the way she brought Mary Shelley, the individual, to life. I learned so much about her childhood, her education, her relationships, and the culture during which she lived that contributed to her creation of the novel Frankenstein. I have listened to Fiona’s presentation regarding poetry and look forward to reading her books that explore in depth the life of Mary Shelley and Elizabeth Barrett Browning. Thank-you for being a part of One Day University!