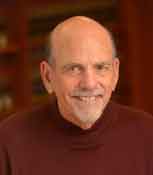 Paul Bergman is UCLA Professor of Law Emeritus and the recipient of the University Distinguished Teaching Award, the Dickson Emeritus Professorship Award, and the American Trial Lawyers Association Award for Excellence in Teaching. He is working on a revised and updated Third Edition of his book Reel Justice: The Courtroom Goes to the Movies.

Who was “Billy Flynn,” the character played by Richard Gere in Chicago? What is the truth behind Abraham Lincoln’s cross-examination in his most famous criminal trial? What is the best-ever depiction of a female trial lawyer? What happened when French criminal suspects demanded their Miranda rights? What is Positraction? Professor Bergman answers these questions and more in an informative and entertaining talk.