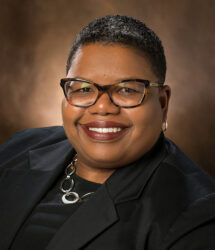 A musician and scholar, Tammy L. Kernodle is University Distinguished Professor of Music at Miami University in Oxford, OH. Kernodle is the author of Soul on Soul: The Life and Music of Mary Lou Williams and served as Associate Editor of the three-volume Encyclopedia of African American Music. She appears in numerous documentaries, including Mary Lou Williams: The Lady Who Swings the Band, Girls in the Band, and the Emmy-award winning Miles Davis: The Birth of Cool. The immediate Past President of the Society for American Music, she has worked on educational programs with The American Jazz Museum, the National Museum of African American History and Culture, NPR, the Rock and Roll Hall of Fame, the BBC, New World Symphony, and Carnegie Hall.

In the mid-1950s Rock & Roll entered America’s cultural consciousness as music that encapsulated the angst, rebellion and pursuit of personal freedom that framed the lifestyle of the American teenager. Though mostly marketed and branded as a new sub-genre of music, Rock & Roll extended out of a musical genealogy that included country, blues, jazz, and gospel music. Of these genres, the blues–especially variant forms of urban blues that emerged in the decade following World War II–had the most direct influence on early rock culture. Although we often equate the musical experimentation and social rebellion reflected through the rock idiom with male musicians, there were also women who were significant in contributing to the progression of the genre. Through an examination of the musical and professional lives of guitarists Memphis Minnie and Sister Rosetta Tharpe, and vocalist Big Mama Thornton, this lecture will explore the role black women played in creating the performance aesthetic and repertory that defined early Rock culture in America, and later served as the foundation of blues and rock idioms in the U.K. during the 1960s.

Singing in My Soul: Black Gospel Music in the Secular Age, by Jerma A. Jackson

Tammy Kernodle’s “Having Her Say: The Black Woman’s Use of the Classic Blues as Lament,” from Women and the Worlds of Music: Past and Present. Editor, Jane Bernstein (pp. 213-231)

1. How would you characterize the sound of early Rock & Roll in the 1950s? How is it similar or different from the transatlantic blues and rock idiom that developed in England during the 1960s?

2. What social factors contributed to the development of variant forms of blues and sacred music during the 1930s and 1940s?

3. What do Memphis Minnie and Sister Rosetta Tharpe represent in terms of black women’s engagement with new forms of music technology?

Lovely fluid presentation, so much new to me. Captured an important area.

great music selections and a lot of insightful information – thanks!

4 months ago
kathleen.geraghty
I got THE BLUES -- and that's a good thing!

Wow! I’m a born-and-bred Chicagoan and have been a fan of the blues for many, many years. (I sure do miss the great Koko Taylor… heavy sigh…) I learned quite a bit from this lecture — including that Little Richard based his howling vocals (at least in part) on Sister Rosetta Tharpe’s unique style. Terms like ‘jump blues’ and ‘sonic marker’ make me want to explore the recommended readings as well. The discussion of the emergence of the electric guitar and associated technologies in the post WWII years was fascinating!

A lovingly and carefully crafted introduction to a complex musical tradition. It whet my interest in the music. Would love a follow-up lecture!