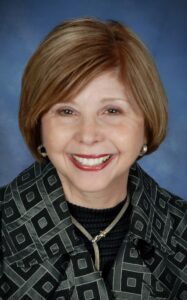 Dr. Diana Carlin is professor emerita of communication at Saint Louis University and a retired professor of communication studies at the University of Kansas, where she taught about women in politics, suffrage leaders, and the rhetoric of women’s rights. She also has lectured extensively on the suffrage movement and its leaders during the 100th anniversary celebration of the 19th Amendment. She is the recipient of university, state and regional teaching awards and was a 2018 inductee into the Central States Communication Association Hall of Fame.

Susan Brownell Anthony is known as one of the leaders of the campaign for women’s suffrage. Anthony worked with close friend Elizabeth Cady Stanton and other suffrage leaders for 55 years championing abolition, women’s rights, equal pay temperance, and fair labor conditions. Stanton saw many states grant women the right to vote but died 14 years before the 19th Amendment was adopted, expanding suffrage to most women. Anthony’s efforts were not without controversy as she was involved in a split in the movement, often giving speeches that are viewed today as anti-immigrant and anti-Black suffrage. She is also famous for voting illegally in 1872, going on trial, and never paying a penalty or serving time. This program explores the highlights and controversies of Anthony’s work on behalf of the causes to which she dedicated her life.

Susan B. Anthony: A Biography, by Kathleen Barry

Votes for Women: American Suffragists and the Battle for the Ballot, by Winifred Conkling

The Woman Who Dared to Vote: The Trial of Susan B. Anthony, by N.E.H. Hull

Susan B. Anthony: Biography of a Rebel, Crusader, and Humanitarian of the Women’s Rights and Feminist Movements, by Alma Lutz

Failure is Impossible: Susan B. Anthony in Her Own Words, by Lynn Sherr