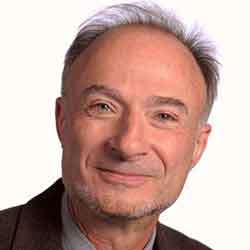 Jeremy Yudkin is Professor of Music and and Director of the Center for Beethoven Research at Boston University. In 2009 he won the Award for Excellence in Historical Recorded Sound Research from the Association for Recorded Sound Collections for his book “Miles Davis, Miles Smiles, and the Invention of Post Bop.” He has been nominated six times for Boston University’s Excellence in Teaching Awards.

Between 1962 and 1970 The Beatles released 22 singles, several EPs and 11 albums. Sales records charted more than 50 top-forty hit singles. They were the first British pop group to achieve major success in the United States and they scored 22 number-one hits in the USA alone. It is calculated that the band has now sold over two billion albums, and a few years ago we celebrated the 50th anniversary of The Beatles’ first appearance in the United States. That evening, the Ed Sullivan Show was watched by 73 million people – at that time over a third of the entire population of the country. And of course, The Beatles produced lots of different kinds of music – folk, rock, country, rockabilly, soul blues, doo-wop – and they invented new genres like psychedelic music and heavy metal. Stringed instruments and baroque trumpets and horns brought their music into the realm of art music.

The total number of songs in the Beatles canon is 211. A survey of the students in my Boston University classes reveals that they have huge numbers of Beatles songs on their cell phones, in some cases more than any other group. All this is, of course, nearly sixty years after the band broke up. American and English culture of the 1960s is reflected more in the music of the Beatles than in that of any other group. The rise of the Beatles coincided with a vital shift in the relationship between the two countries and a change in the significance, relevance, and artistic ambitions of popular music.