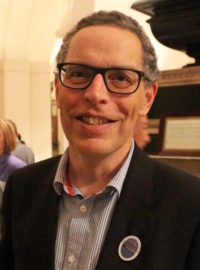 “As I write, highly civilized human beings are flying overhead, trying to kill me.”

Between September 1940 and May 1941, London was bombed nearly every night, with tens of thousands killed or wounded, and millions of homes destroyed or damaged. Night after night, the population of the world’s biggest city was forced into shelters, basements and tube stations as the Luftwaffe tried to destroy the city and the morale of its people.

In this talk, Don Brown will look at the history of the Blitz, its effect upon the capital’s population and its buildings, and how defenses and air raid responses were organized. We will also examine the other major raids across the UK and the ‘V’ weapon onslaught that hit London in the last year of the war. It’s a story of fear, survival, and heroism, but there is so much more to it than the popular image of cheerful cockneys “keeping calm and carrying on.”

The Blitz: The British Under Attack, by Juliet Gardner

The Secret History of the Blitz, by Joshua Levine

The Battle of London 1939-45: Endurance, Heroism and Frailty Under Fire, by Jerry White

The Splendid and the Vile: A Saga of Churchill, Family and Defiance During the Blitz, by Erik Larson

This was a very good refresher on WWII and skillfully presented.

5 months ago
Karen Simmons
A+

The hour flew by. Mr. Brown’s talk about the bombing of London was full of facts as well as anecdotes and historic maps and photos. He is well versed in military history but also on the impact the Blitz had on the British citizens. He also put into perspective the Blitz vs. the allied bombing of Germany.