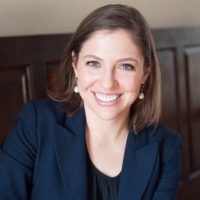 Dr. Lindsay M. Chervinsky is a Professorial Lecturer at the George Washington University, a Senior Fellow at the Center for Presidential History at Southern Methodist University, and the Kundrun Open-Rank Fellow at the International Center for Jefferson Studies. Her writing has appeared in the Wall Street Journal, Ms. Magazine, The Daily Beast, The Bulwark, Time Magazine, USA Today, CNN, and the Washington Post, and she is the author of the award-winning book, The Cabinet: George Washington and the Creation of an American Institution. Previously, Dr. Chervinsky worked as a historian at the White House Historical Association.

The Constitution does not mention the cabinet and yet, the department secretaries are some of the most powerful positions in the country, and every president has governed with a cabinet. Where does it come from? In this course, Professor Lindsay M. Chervinsky explores how George Washington created the cabinet to provide the support and advice he needed in moments of crisis. Chervinsky shows how Washington molded the cabinet based on his Revolutionary War experience, and then left long-lasting precedents that continue to guide his successors in the 21st century. This story is one that every citizen should know, as modern presidents are still mostly guided by norm and custom—which all trace back to Washington.

The Cabinet: George Washington and the Creation of an American Institution, by Lindsay M. Chervinsky

The Black Cabinet, by Jill Watts