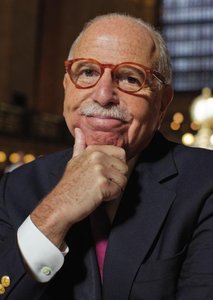 Sam Roberts is an Adjunct Professor at New York University who has written for The New York Times since 1983. He is also the host of the NY1 show The New York Times Close Up, and the author of several books, including A History of New York in 101 Objects.

NYU Professor and New York Times Reporter Sam Roberts has chosen 20 objects that embody the narrative and history of New York City. To capture it in so few objects seems near impossible, as New York compresses a practically innumerable number of objects in its small space. Yet that is precisely what the class offers, a luminous peak at the essence of what makes a great city. Selected with a lens for the “quirky,” the objects are a far cry from the clichés of tourism. Instead, they serve as living records of the city’s triumphs, tragedies, and remarkable resilience. Tucked between the entries are delightful curiosities, such as the pear tree that became the final living connection to New York’s Dutch heritage, as well as many others.

Highlights of the History of New York City in Twenty Objects include:

Watch the History of New York City in Twenty Objects

For more lectures about US History and New York check out Sam Roberts lectures in our video library. Sign up for One Day University Membership today for unlimited access to hundreds of talks and lectures including ‘History of New York City in Twenty Objects’ and so much more!