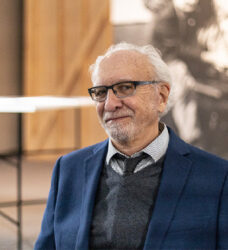 Bradford R. Collins is Professor of Modern and Contemporary Art at the University of South Carolina, where he recently won the Mungo Distinguished Professor of the Year Award.  Dr. Collins has published widely on topics from Edward Manet to Mark Rothko to Andy Warhol and is currently writing The 16 Defining Moments in the History of Western Art: an innovative survey of Western Art that approaches the subject thematically rather than chronologically.

Pablo Picasso is the most famous artist of the first half of the 20th century. He is the artist most identified with the dizzying changes characteristic of that era — of what we used to simply call “modern art” (now known as Modernism). Most of the works for which Picasso is best known—including The Old Guitarist (1903-4), Les Desmoiselles d’Avignon (1907), Ma Jolie (1911-12), and Woman in White (1923)—were produced in a twenty-five-year span between 1901 and 1925. As these disparate examples suggest, this was a period of headlong changes for Picasso himself. During these two and a half decades he went through a series of very different periods, beginning with the Blue, followed by the Rose, the Primitive, the Analytic Cubist, the Synthetic Cubist, and finally his Neoclassical Period. In this lecture, Professor Collins will trace those broad changes with an eye to identifying the various influences, concerns, and purposes both biographical and art historical.

The Success and Failure of Picasso, by John Berger

A Life of Picasso, vols. 1-4, by John Richardson

I can hardly be considered an art critic, but I found this lecture particularly difficult. Professor Collins had all the information and knowledge to convey, however, he was very hard to listen to whilst he was conveying that information. The lecture would have been much shorter, and allowed for more question at the end if he did not stutter and seem to forget his train of thought. Sorry, but it was all I could do to continue listening.

Professor spoke clearly and conveyed effectively a considerable amount of Information. More scholarly than the typical one day U presentations, and I liked that.

He shares a lot of interesting, consise information. Well worth watching.

I found the way he spoke, stammering and hesitating, very distracting. It was painful to listen to him. Thank goodness I could speed up the talk to double time. That’s how I got through it… Sorry to say this was the worst speaker I have heard so far…