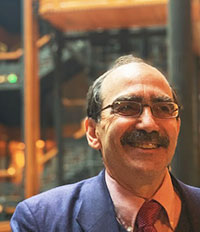 Film historian Jonathan Kuntz has been teaching film history at the UCLA School of Theater, Film and Television for 34 years. A widely respected expert on the Hollywood studio system and American motion pictures, Professor Kuntz has appeared in numerous documentaries on American film history, is widely quoted in the media, and has contributed to The New York Times.

By the 1980’s, the companies that had scooped up the major Hollywood studios in the 60’s began to reshape themselves into entertainment conglomerates.

During this class, Professor Kuntz will pick up modern Hollywood in 1989, chart the formation of the six global entertainment conglomerates in the 1990’s, and the move to tent-pole franchises in the 21st century. He will discuss the major transformation to digital, then the “streamer shock” of the last decade, where the entire structure of movies (that seemed so solid for a century) was shattered.

We will examine the shake-ups of the last few years, as well as the restructuring of the film business, and then try to predict what will emerge from an industry stunned top to bottom by the Coronavirus: will there even be a “Hollywood” going forward into the decade of the 2020’s?