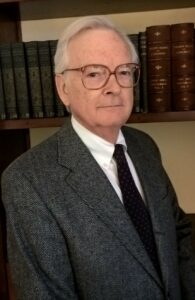 Charles W. Calhoun is a historian who specializes in the political history of the United States from 1865 to 1900.  He holds degrees in history from Yale and Columbia, and is Thomas Harriot College Distinguished Professor of History, emeritus, at East Carolina University.  He also is a past president of the Society for Historians of the Gilded Age and Progressive Era. Calhoun is the author or editor of ten books, including his latest: The Presidency of Ulysses S. Grant.

The administration of President Ulysses S. Grant is one of the most misunderstood and myth-encrusted in all of American history. The only president to serve two full consecutive terms between Andrew Jackson and Woodrow Wilson, the former Union General enjoyed a wide popularity in his day. As chief executive, he fought vigorously for the rights of African Americans, initiated reform of the civil service, instituted improvements in the Indian service, negotiated a landmark treaty with Great Britain that averted war, and pursued an array of economic policies designed to lower taxes, reduce the national debt, stabilize the money supply, and restore the country to a specie-backed currency. Yet throughout his two terms, Grant encountered fierce, sometimes malicious, criticism — not only from enemies in the opposing political party, but also from men he had bested in his own.

Following his presidency, the disparagement continued, exerting an outsized influence on historians’ assessment of his time in office. The highly negative portrait persisted for a century, until the last few decades when historians have undertaken a thorough reexamination of Grant’s career — especially with new insights regarding his performance in the White House. In this talk, Professor Charles W. Calhoun will examine the evolving historiography of Grant’s presidency, the assets and skills he brought to the job, the problems and issues he encountered, and the achievements of his two terms.

The Presidency of Ulysses S. Grant, by Charles W. Calhoun

Growing up in the ’60’s and 70’s and having a deep interest in US presidents, I was always curious about Grant’s placement in presidential rankings – generally very low and sometimes listed as “failure” along with Warren Harding. Professor Calhoun’s talk was a refreshing take on Grant’s administration and the process of rehabilitation that his legacy has undergone in the past several decades. Calhoun explains how, after his presidency, the reputation of Grant as a gullible and inept character was promoted by those with personal and political agendas. In fact, while not uniformly successful in all domestic and international efforts, Grant was an able administrator who was ahead of his time in the advancement of civil service reforms and social justice initiatives.

This was an enlightening talk. I too, only knew about Grant from popular history, and thought that he was one of our worst presidents. Given the facts brought up here, it’s high time for a re-appraisal, and raising his relative rank among his peers.