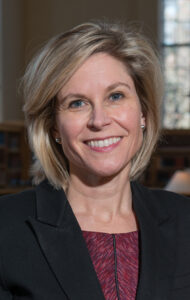 Caroline Winterer is William Robertson Coe Professor of History and American Studies, as well as the Department Chair, at Stanford University. A Distinguished Lecturer for the Organization of American Historians, she also is a recipient of an American Ingenuity Award from the Smithsonian Institution for mapping the social network of Benjamin Franklin. She is the author of several books, including American Enlightenments: Pursuing Happiness in the Age of Reason, and her latest, entitled Time in Maps: From the Age of Discovery to our Digital Era.

Benjamin Franklin was truly a genius, recognized as such at home and abroad, in his own time and still today. He dabbled in many things, but also mastered them—philosophy, electricity, diplomacy—and shaped his world and ours. He coined electrical terms like “battery,” “positive,” “negative,” “charge”—he wrote about demography, economics (Adam Smith was among his friends), made the post office operate efficiently (inventing an odometer to measure how far the mail wagon traveled), and he invented a musical instrument for which both Mozart and Beethoven composed. He built things—bifocal glasses, an arm extender to reach books on high shelves, an electrical apparatus to cook a turkey, swimming fins (he is in the Swimming Hall of Fame), more efficient street lights, and when his brother suffered from kidney stones, Franklin made him a catheter.

The History of Benjamin Franklin

Born the tenth and youngest son of a decidedly humble family of puritan candle-makers in Boston in 1706, Franklin’s rise to the front ranks of science, engineering, and invention was as unexpected as it was meteoric. Here is a man with only two years of proper schooling who later received honorary degrees from Harvard, Yale, Oxford, and St. Andrews as well as the eighteenth-century equivalent of a Nobel Prize for Physics.

What Did Benjamin Franklin Invent?

George Washington referred to him as “that great philosopher.” Thomas Jefferson called him “the greatest man of the age and country in which he lived.” John Adams said of him, “Franklin had a great genius, original, and inventive, capable of discoveries in science no less than of improvements in the fine arts and the mechanical arts”. The lightning rod was the most spectacular. After that invention, the world began to look upon natural phenomena in a different light, recognizing man’s ability to understand and control them through science and invention. But for Franklin it was only one of many. Another of his original creations, bifocal eyeglasses, was very simple and came to him without any previous experimentation. One contemporary claimed Franklin invented them so he could watch the girls across the room while still keeping his eyes on the one next to him. A third original invention of Franklin’s is daylight saving time, which gives extra hours of daylight to enjoy in the evening.

Benjamin Franklin was a genius. A stickler for economy, Franklin’s dictum “early to bed, early to rise, makes a man healthy, wealthy, and wise” urged his fellow countrymen to work during daylight and sleep after dark, saving money on candles. He calculated that if all the families of Paris who caroused until late at night and then slept until noon would arise with the sun six hours earlier, 64 million pounds of candle wax would be saved in six months’ time. In fact, both Mozart and Beethoven wrote music for an instrument invented by Franklin, the glass armonica. In Europe, Franklin’s fame for the armonica rivaled the reputation he had achieved for his electrical experiments and lightning rod. Franklin never patented any of his inventions, saying, “I never made, nor proposed to make, the least profit by any of them.” It was a matter of principle with him that, as he had benefited from past inventions and discoveries, present and future generations should be able to benefit freely from his inventions. Among his other inventions were an improved printing press, a flexible catheter, an extension arm for grasping items beyond one’s reach, his famous stove and room heater, a modified odometer, a three-wheel clock that displayed seconds, minutes and hours, an improved oil lamp, flippers to aid swimming, and even a sea anchor.

How Was Benjamin Franklin Able to Invent So Many Things?

He explained his method so that others could do the same. Franklin was that rare genius who wanted to share his accomplishments—he never patented any of his inventions, and welcomed challenges and improvements to them. He wanted others to be able not just to do what he did, but to improve on what he did. What drove him to invent and create was his boundless curiosity—wanting to know more about how the world worked and how better to live in it—and his great optimism, his faith that people could make the world a better place.

Like his hero Isaac Newton, Franklin’s great genius lay in optimizing, in tinkering, in improving, and in never being satisfied with the world as he knew it. In this talk, we will examine many of Franklin’s inventions and ideas to make life simpler, cheaper, and easier for himself and everyone else. It turns out that those ideas encompassed not only natural science and engineering—the kite experiments and the bifocals for which he is justly remembered—but also all sorts of public works, civic improvements, political trail-blazing, and fresh, new business ideas. His experimenter’s instinct, his relentless drive to build a better world one small piece at a time, even encompassed innovations in medical device design, in music, in cookery, and in ventriloquism. Hardly the tortured genius, Franklin took a schoolboy’s pleasure in everything he made. Experimenting was a constant source of beauty, pleasure, and amusement for him, even when things went wrong (which they did all the time).

For more lectures about Benjamin Franklin and his inventions by Professor Caroline Winterer check out the History lectures in our Video Library. Sign up for One Day University Membership today for unlimited access to hundreds of talks and online lectures.

SPECTACULAR! Where was she when I was in college?
So much learned! Professor Winterer does Stanford well! She is articulate, brilliant, has excellent voice projection, has great gestures……..
She is also a Beautiful woman.