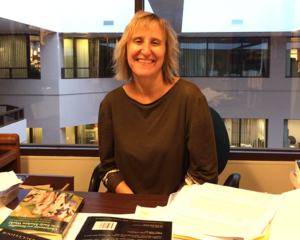 Dr. Amy Leonard is Associate Professor and Director of Undergraduate Studies in the History Department at Georgetown University. She is the author and editor of several books, including Nails in the Wall: Catholic Nuns in Reformation Germany and Embodiment, Identity, and Gender in the Early Modern Age (with David M. Whitford, eds.), as well as various articles and chapters on the Reformation, nuns, gender, and sexuality in early modern Europe. She is currently working on a book tentatively titled The Reformation of Virginity: Views of Female Sexuality in Reformation Europe.

“Divorced, beheaded, died; divorced, beheaded, survived.” This six-word rhyme is often all anyone knows or remembers about the six wives of Henry VIII. It is also the starting point for the successful musical Six, on Broadway and touring the country. But as the musical makes clear, these six women were more than just a footnote in Tudor history. This class will look at the history of 16th century England, through the eyes of Catherine Aragon, Anne Boleyn, Jane Seymour, Anne of Cleves, Catherine Howard, and Katherine Parr. These women were instrumental in helping to solidify the Tudor dynasty, instigating and supporting the Protestant Reformation, and helping to usher in one of the most famous monarchs of early modern Europe (Elizabeth I). They deserve to be remembered for more than just how their lives ended.

Divorced, Beheaded, Survived: A Feminist Reinterpretation of the Wives of Henry VIII, by Karen Lindsey

Six Wives: The Queens of Henry VIII, by David Starkey

1. Why is there such a fascination with the Tudors, more so than with almost any other European royal family?

2. What impact do you think these women/marriages had on Henry’s children (and future monarchs), Edward VI, Mary, and Elizabeth I?

3. How important was religion, and the Reformation specifically, to the events affecting Henry’s wives?

I really enjoyed this lecture.
As I have long been interested and read about Tudor history, this lecture provided me with new information and clarification about Henry, and his 6 wives.
Thank You!

2 days ago
Virginia Ober
THANK YOU ONE DAY U

Professor Leonard’s knowledge did not overshadow her ability to simplify things for the beginner. Not only did I leave the hour with a better understanding of Tudor history, but also a desire to study more. What a great experience it would be to be enrolled in a semester with her.