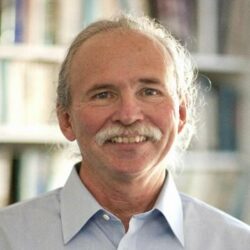 Richard White is the Margaret Byrne Professor of American History, Emeritus at Stanford University. A U.S. historian who specializes in the American West, the history of capitalism, environmental history, history and memory, and Native American history, Professor White is a MacArthur Fellow and a recipient of the Mellon Distinguished Professor Award.  He has twice been a finalist for the Pulitzer Prize, for his works The Middle Ground: Indians, Empires, and Republics in the Great Lakes Region, 1650-1815, and Railroaded: The Transcontinentals and the Making of Modern America.

The transcontinental railroads formed the most ambitious and rather complex federal infrastructure project of the nineteenth century.  At one extreme, the construction of the Pacific Railway was absolutely a triumph. On the other hand, its operation, and the operation of the other transcontinentals, was (to put it bluntly) a train wreck.

The thesis of this unique presentation is simple, though it’s not the usual textbook account: the U.S. built too many railroads, we built them too soon, we financed them recklessly, and we allowed them to inflict grave environmental, social, political, and economic damage.  All of this was bad enough, and recognized by many at the time, but there’s more. In our own time, Americans have forgotten much of what nineteenth-century Americans came to know.  We have celebrated the over-construction that we should be lamenting, and we have often brought the transcontinentals forward as reason to pursue equally dubious current projects.

Railroaded: The Transcontinentals and the Making of Modern America, by Richard White

kept repeating over and over again

Lively presentation by a good speaker who took strong, well-grounded positions on some controversial aspects of the story, but without being polemical. Enjoyed the occasional bits oh humor and irony, too.

This honest review of our 19th Century railroad building helps us think about how well we can realistically deal with problems we face today.

Prof. White gave us lots of detail, took strong, well-grounded positions on some controversial aspects of the story, and without being polemical. Enjoyed the occasional bits oh humor and irony, too.

Prof. White gave us lots of detail, took strong, well-grounded positions on some controversial aspects of the story, and without being polemical. Enjoyed the occasional bits of humor and irony, too.

8 months ago
Mika Vallstrøm
Repeated but good for beginners

A true rail road nerd who is a delight to listen too.

I was expecting a gauzy look at the romance of the rails. What I got instead was a hard-hitting exposé on the failures and excesses of 19th century government and industry, as well as some pointed references to current events, showing how little we’ve learned.