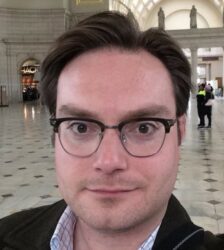 Michael Cramer is a professor of Film History at Sarah Lawrence College. He has published numerous articles about American and European film and focuses on the relationship between film and wider-scale historical and economic changes. He is the author of Utopian Television: Rossellini, Watkins, and Godard beyond Cinema, and a co-editor of and contributor to Fredric Jameson and Film Theory.

After sound was introduced into American films in the late 1920s, new forms of comedy quickly emerged. The new comedy stars, like Cary Grant, Clark Gable, Rosalind Russell, and Carole Lombard, were a far cry from the cartoonish clowns of silent film, and instead represented a sophisticated modern lifestyle that pushed social boundaries and dealt playfully with gender norms. The greatest comedies of the early sound era have lost little of their appeal today, both because they represent some of the finest writing and performances to ever grace the genre, and because they deal with social and personal concerns that are no less relevant today than they were almost 100 years ago.

In this presentation, Professor Cramer will examine 3 classic 1930s comedies that fall into what is often called the “screwball” genre. Screwball Comedies were characterized by their fast, witty banter and unconventional romantic plots. And yet, these films were not by any means only about romance: they often deal with other major social questions, such as women’s freedom to choose their own partners (Frank Capra’s It Happened One Night), the increasing presence of women in traditionally male professions (Howard Hawks’s His Girl Friday), and class antagonism (Gregory La Cava’s My Man Godfrey). In each case, the individual story provides a resolution that holds broader, often metaphorical, social implications, and the romantic couplings that end each function as down-to-earth fairytales for a modern world.

Pursuits of Happiness: The Hollywood Comedy of Remarriage, by Stanley Cavell

1. What are the main social obstacles that stand in the way of successful marriages and relationships in these films? Are they surmounted by the end, or is there a form of compromise between individual desires and social norms?

2. What role does humor play in the formation of couples? Are there ways that a character’s ability to be funny or witty offers a path to success and happiness?

3. How are different types of professions represented in these films? For instance, why might we see newspaper reporters in so many screwball comedies? Are there certain professions or attitudes toward work that are shown more positively than others?

4. How might we see the influence of screwball comedies in more recent films? Do the same social concerns crop up?