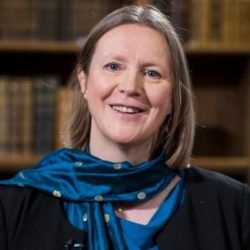 Catriona Seth, FBA (Fellowship of the British Academy) is the Marshal Foch Professor of French Literature at the University of Oxford and a Fellow of All Souls College, Oxford. A distinguished cultural historian, she has published widely (mostly in French) on literature and cultural history of the eighteenth century.

Countless audience members have been moved to tears by Les Misérables’ “I Dreamed a Dream” or “Do You Hear the People Sing.” However, only some of them know that the story behind the much-loved show is based on a novel by a Frenchman born in 1802. This lecture will provide an introduction to Victor Hugo, who is sometimes said to be France’s greatest writer. Hugo was famous in his time as a poet, novelist, and dramatist. He was also an active political campaigner on issues like child labor and hanging. But what makes Victor Hugo a great writer? Who did he admire, and how did personal tragedy impact his works? What links his writing and his political activism, and what led him to be exiled from France, on the one hand, and granted a state funeral at his death, on the other? Professor Catriona Seth will answer these questions and more as she seeks to present the man behind Les Miz.

I knew very little about Victor Hugo before, but now I have the beginnings of an understanding of what a great author he was.

Extremely comprehensive, insightful, well-organized and succinct lecture on the multiple facets of Victor Hugo and the themes of his masterwork Les Miserables.