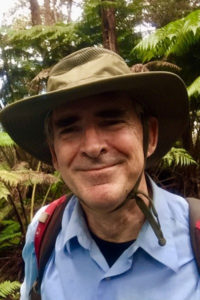 Richard Hazlett is a Professor Emeritus from Pomona College in Southern California, where he taught geology and environmental analysis for nearly 30 years. He specializes in the study of volcanoes and is co-author of the book Volcanoes: A Global Perspective. Professor Hazlett now serves on the faculty of the Geology Department at the University of Hawaiʽi at Hilo. As a research associate with the U.S. Geological Survey, he is currently studying the eruptions and history of Kīlauea Volcano on the Island of Hawaiʽi.

Volcanoes are one of the world’s most important natural phenomena. But why do they exist, and what explains their peculiar distribution? Why do they display such a variety of forms and vary so much in the threats that they pose to humanity? Is any place on Earth’s surface truly “safe” from volcanic eruptions?  And is Planet Earth in some way special because of its volcanoes? If so, what do they teach us about our terrestrial home? These fundamental questions about volcanoes have intrigued (and frightened!) people for millennia, and we have learned much in the past fifty years of exploration to address each, scientifically. In fact, some of the emergent reality actually surpasses mythology and fiction in the fantastic picture it portrays.

Interesting lecture. Most of his points were new to me. Glad I tuned in.

Wonderful lecture and professor! We had taken some geology in college but really learned even more today! Very exciting!

I enjoyed Professor Hazlett’s volcano presentation and appreciate his explanation of the geological factors that contribute to red and grey volcanic eruptions. Nicely done.

Professor Hazlett provides an example of a broadly experienced, gently confident, curious scientist who colorfully explains some of the broad topics in volcanology connecting the viewer to historic eruptions and providing explanations for what has happened and likely will happen.

Very interesting to be educated about the causes and purposes and benefits of volcanoes. Professor Hazlitt really knows his field and speaks well. I am pleased that I was able to be part of this lecture.