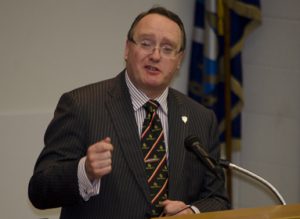 In April 1912, White Star Line’s new transatlantic liner Titanic entered service as the second of three Olympic class steamers. The largest ship in the world and the largest moving object yet built by man, she set sail from Southampton bound for New York, but mid-Atlantic she collided with an iceberg and sank with great loss of life. Thus, the legend and fascination that is Titanic began. And it’s clear that even today, after more than 100 years, interest in the ship and her tragic demise is as strong as ever.

As with all such disasters, there were numerous events that led up to the final act–some of which may well have played out differently and could have altered the course of history. Was the ship badly designed or poorly constructed? Was she negligently navigated? And what actually happened that cold April night? In this illustrated presentation, naval architect Stephen Payne –designer of today’s only remaining transatlantic liner, Queen Mary 2–assesses the facts and dispels the myths about this famous ship and her enduring legacy.