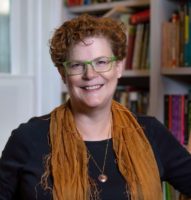 Armed with a PhD in history from the University of Chicago, author, speaker and historian, Pamela D. Toler, translates history for a popular audience. She goes beyond the familiar boundaries of American history to tell stories from other parts of the world, as well as history from the other side of the battlefield, gender line, or color bar. Toler’s work has appeared in History Channel Magazine, MHQ: The Quarterly Journal of Military History, The Washington Post and Time.com, and she is the author of nine history books for children and adults, including Women Warriors:  An Unexpected History.

The woman warrior is always cast as an anomaly—Joan of Arc, not G.I. Joan. But in fact, women have always gone to war—or fought back when war came to them. Women fought to avenge their families, defend their homes (or cities or nations), win independence from a foreign power, expand their kingdom’s boundaries, or satisfy their ambition. They battled disguised as men. They fought, undisguised, on the ramparts of besieged cities. Some were skilled swordsmen or trained snipers; others fought with improvised weapons. They have been hailed as heroines and cursed as witches, sluts, or harridans.

In this lecture, Dr. Pamela Toler shares stories of historical women for whom battle was not a metaphor. Featuring both well-known and obscure examples — drawn from the ancient world through the twentieth century, and from Asia and Africa, as well as from the West — she introduces a group of women warriors who turned out to be more important than she expected: the most forgotten women in the category of forgotten women warriors. And she debunks the myth that the only women who fought were larger-than-life exceptions.

The Warrior Queens, by Antonia Fraser

Women, Armies and Warfare in Early Modern Europe, by John A. Lynn II

The Amazons: Lives and Legends of Warrior Women Across the Ancient World, by Adrienne Mayor

1. Why have women historically taken up arms, and how do those reasons relate to traditional women’s roles in society?

2. Why is there so much resistance to the idea of women in battle?

3. What do we learn when we look at women warriors across cultural boundaries, rather than in isolation?